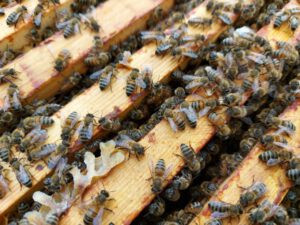 As a bee queen lives approx. 3-5 years, Oma maa continued with the same bee colonies which were acquired last year in the year one (read the report from last year’s honeybees@omamaa). The only change for this season was a new beekeeper, Michaela Mostynova 🙂 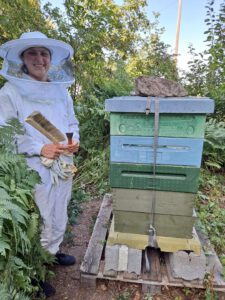 Both of the colonies made it through the long, snowy and freezing winter and started with their diligent business as soon as the first sun rays allowed it. Michaela continued with the same beekeeping philosophy with which the beekeeping at Oma maa has started: minimum interventions in the bees’ lives. In practice, that means, among others, that a beekeeper doesn’t open the hive unless necessary and doesn’t take all the honey she could. And that was also the case for this year’s honey extraction.

Despite the very short and intense summer, the bees have managed well and collected a good amount of nectar which they turn into the honey we are interested in. This season, there was approx. 30 kilos of honey per colony which could have been extracted. That would give us 60 kgs of honey to give out to the members. However, since the summer was intense and thus short, the beekeeping season ended a month earlier than it usually would! 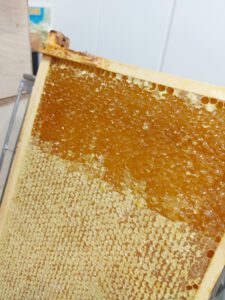 The beekeeping season follows the cycle of nature, including blooming of the flowers bees utilize. So the short season means that the last flowers bloomed almost a month earlier which means that the bees didn’t have a lot of nectar to collect during August even though it was still nice and warm outside. To make the point, Michaela decided to leave the bees approx. 35 kgs of honey for the winter season which is almost double what a “typical” beekeeper would do. As such, the Oma maa bees are not fed with any additional sugar water for the winter months which is a common practice otherwise. Sugar water doesn’t necessarily mean anything bad and evil for the bees, it is just less natural to them as it is for people eating candies instead of fruits.

The honey extraction was done this year on a professional extraction machine which is gentle to the honeycombs in the frames. These frames with the honeyless combs can be used again in spring which is again favorable to the bees – it is easier and also preferable for them to use such frames over building a new wax base on a brand new frame. Oma maa rented a few more beekeeping machines this year to secure all the needed hive components. A wax from very old frames was boiled and partially cleaned, old frames were disinfected and refurbished and soon these will be equipped with wire and/or a wax wall to be ready for the next season. The beekeeper is beesy all year round 🙂

Thanks to the machines mentioned above, there will also be some wax distributed to the members on top of the honey. Beeswax is typically used in cosmetics or candle making and one can make these products easily at home. 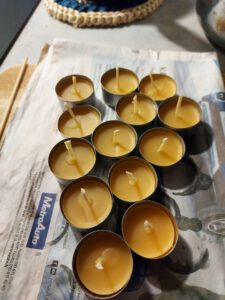 There has also been one workshop this summer (visit to a hive) and one more theoretical course is planned for later this autumn. So in case you are interested in the bees and/or beekeeper’s work, stay tuned and follow Oma maa’s Facebook group to learn more about the date.