This year we wanted to come to host more honeybee pollinators on the farm’s fields and start up honey production. Oma maa friend Jean Poignot had some first experiences with his own beehive, and offered to put his skills and knowledge he gained so far to the use of Oma maa, with the aim to also start up a participatory process to learn around bees and beekeeping together.

Thirty four Oma maa coop members signed up to support this process, and put together the money needed to make the initial investments. And whilst due to different factors we could not make this first year a very participatory process, over the last two weekends a little group of us extracted this years honey – Kiitos besides Jean also Minna, Tuula ja Emmi! 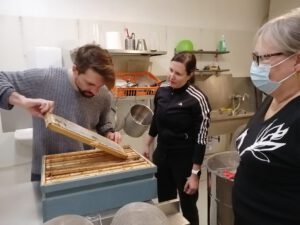 During the extraction we removed the cappings of beeswax on the honey holding cells in the frames. The frames were then placed in an extractor,  which spins them so that most of the honey gets removed by centrifugal force. 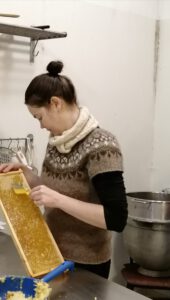 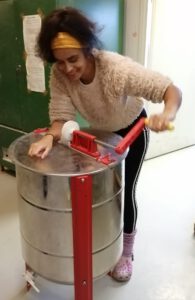 We also looked back over the process, which started in May 2020, with the purchase of two swarms of bees, 40.000 bees each. Jean explained a bit more on the basics. The beehive, the house of the bees, has a floor, a body and a roof. The body of the beehive is a wooden box, with 10 frames in it. The bees will use the frames to make their honey in hexagonal prismatic structured cells made of beeswax, which are called honeycombs. Once there is honey in them, the bees will be capping the cells with wax for storage. As the season goes by,  boxes are added as frames get full of honey. In our process, Jean set out a total of six boxes. 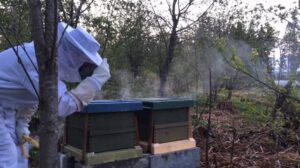 Regularly checks will happen as to how the bees are working, which depends on factors as weather and the presence of flowers. Finland has a short season, but just like farmers, bees will make the most of it, and in summer be flying up to 20hours a day!

As we talked about, it was very dry in the beginning of this summer, which will have affected the flying around of the bees. Then followed quite some rain – and bees do not work when it rains. In the beginning of August it was harvesting time, meaning that Jean collected the boxes.  As he stressed, he took what the bees do not need over winter. Two boxes were left for the bees. Jean then fed the bees with liquid sugar, and also gave them treatment to avoid disease, which could make for loss up to 50% of the colony. By the end of September the bees were asleep.  Under 12 degrees they will not move anymore. Instead, they will be keeping eachother warm at a temperature of about 35C, untill about the month of April (pending the outside temperature).

The raw honey we extracted during the last two weekends will be standing for at least two weeks, after these two weeks, we can bottle our honey! We have collected approximately a small 60kg of honey. As Jean commented – our raw honey is not being transformed. We can however be sure of the fact that  up to 90% of honey in supermarkets is modified with water and sugar. 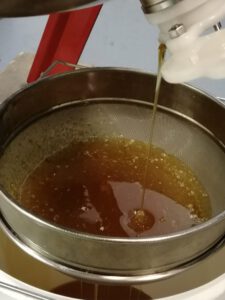 Besides fluid honey we also collected honey combs with a more cristalised honey on it. A wonderful produce to chew on we will also be giving out! 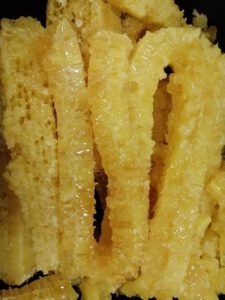 We also already talked about next year. As we have already discussed previously, for this first year , the cost per participating member has been 50 euros (with each member set to receive some 1-2 kg of honey). For year 2 and year 3 then, the cost per member will be 30 euros (and each member would receive again 1-2 kg of honey). The cost for a newly joining participants would again be 50 euros during their first year,  since more participants means also again more of everything.

But importantly also, we would want to set firmer grounds to the participatory mutual learning angle of this process during the next season. The proposal is to get together already during winter, forinstance in January. The frames are then to be cleaned as also rebuilt, using the wax we collected this year.  Following that we can have a learning session with Jean, during which we would go over the proceedings that will need to be carried out in preparation and during next season, and form a team around that.  A next invitation for that will still follow.

Thanking Jean and ofcourse the honeybees! Up with honeybees@omamaa!