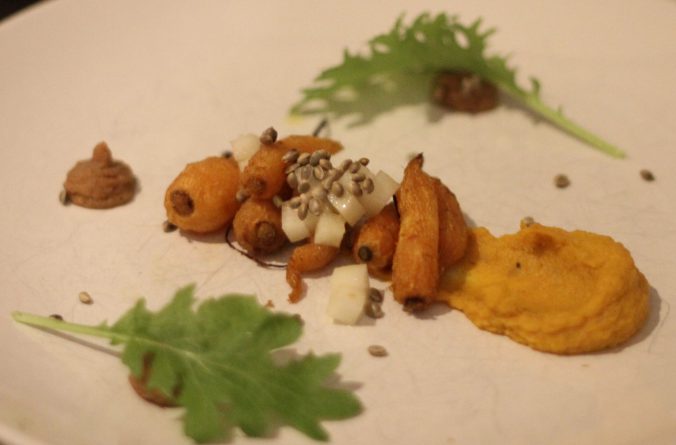 Oma Maa Jäsenkirje 12/2018 : At the end of a beautiful Oma Maa year : up with ecology and democracy (and all the possibilities Oma Maa offers)!

9.12.2018 / omamaafi / Kommentit pois päältä artikkelissa Oma Maa Jäsenkirje 12/2018 : At the end of a beautiful Oma Maa year : up with ecology and democracy (and all the possibilities Oma Maa offers)!

This Newsletter is written during a time in which many fold environmental and societal concerns are speaking up. Quite often the discussion is being framed as being between consumer choice and big policies, and it is pointed to the fact that it is the latter that truly matters. There is another way to look at this which entails an acknowledgement of the need to work towards a profound democratisation, implying (cultural) change in the way we lead our daily lives, which will have to become a backbone of the answer. And in this context, and we talked about this also during our wonderful membership dinner at the end of November (see more below), it is truly enthusing that our coop Oma Maa as a whole offers/can come to offer, different bridges for us, possibilities, to be changing some of the immediate around us, as in/extensive as basically we ourselves want to engage in.

Our November bags continued to see Oma Maa carrots, nauris, lanttu, and punajuuri in them (These previous newsletters will be informative for you who joined only recently).

In the greenhouse the growing of our new round of asian leaves, mangoldi, spinach and pak choi unfortunately got slowed down, as we remained struggling with mice and rats, but also with the heating which was not working properly – the oven broke and needed replacement of a part and repairing. Now the oven is repaired and we are as back on track as we can be with our new plants. This week our first Mangoldi which has had a bit a bumpy ride in these circumstances will not be handed to you in the foodbags, but in the planned pelmenit for the coming week foodbags!

In November, to name but a few things, we started making posts for the foodforest fence, cleaned and stored machinery for winter, fixed and sealed the greenhouse, and made firewood for the heating of the greenhouse. Also  there was the inventory of seeds, more penkkit prepared and planted, and some more lamps added.

In November we also addressed in a few steps where we are standing with our chickens, i.e. with our egg orders. Throughout the year the number of chickens on the farm goes through a cycle relating to Lassila farm also seeing a coming and going of summer chickens. We as Oma Maa coop then again have our own fluctuation in demand. Typically there is then more demand for eggs in the summer then in the winter and as such this flow needs to somehow be organically dealt with. Assessing the situation, we have now also taken up yet another possibility category in the pricing of our eggs. If someone has a foodbagg share, but not an egg share, one can order eggs with the same seasonal commitment as with the foodbags, at the price of 40 euro / 2 kennot per week (if the available amount of eggs allows this).

November started off with a great Kekri celebration – we worked together and took all our oma maa’s givings out of the ground! We prepared and ate a wonderful meal together still outside at the tables under the apple trees, watched the skies being lit up by a high kokko and had a sauna.

A last smaller but important mansikka weeding talkoot also still took place November (the more the beautiful our strawberries will be next year!) – and of course at the farm at large winter preparations came in full swing.

At the Kahvila then that same wonderfulness from the farm continued to the city during our second amazing jäsendinner, during which our cooks (and farmers) Jukka and Jan once again prepared a three-course menu entirely made out of ingredients from the farm.

During the eve we heard on how Oma Maa was doing, including besides on all the so much good what has happened this year also on our challenges – we remain having a real need to be higher the amount of bag orders – as also on the fantastic possibilities Oma Maa already does and can come to offer, as we started this newsletter off with.

And we heard from Jan and Jukka who took part from 9-11 November in the gathering of European Community-Supported Agriculture movements in Thessaloniki, Greece, for their 4th European Meeting. To name a few of the points that came up during their relating and the discussion that followed : Meetings like this serve to empower on a personal and movement building level, with both processes being important for our common objectives at large. And when comparing this meeting to the previous CSA meeting Oma Maa also participated in, one difference is how the Urgenci network is trying to gather more resources from its members to fund international co-action.

In line with also discussions in Oma Maa, the issue of packaging came up a lot in Greece, not only from the perspective of a critique of the use of plastic, but also from the perspective of how we as a coop should consider more the possibilities to do things, including packaging, really different from how they are done on the market – i.e. according to our own values and (informed) standards. This is a possible theme we could be exploring more together during our next membership & friends – dinner which is set for the beginning of February 2019! Last but not least, when looking at the CSA scene in Europe, Oma Maa without a doubt belongs to the most elaborate and further going proposals in terms of the systemic change it seeks and the commitment it thus demands, thumbs up were given for this also in Greece!:)

We are thanking everyone who was with this eve, they were beautiful and mutually strengthening, and as announced then, the contributions given for the dinner will be supporting the making of a traditional fence around the edible forest.

Still about our already much applauded dinners @Kaarlenkatu, the idea is next year to continue with our membership dinners at least once a month. In addition, Oma Maa@Kaarlenaktu 15 will be opening up for public pre-reserved dinners.

For the December month we are now at 51 bag orders, and are again happy with a few more people who have joined as full coop members, as well as with the eight new (try-out) members that responded to the possibility to receive an Oma Maa Joulukassi special – Welcome! And we on the farm are excited about the bag content we are currently preparing for you in the two still upcoming bag weeks (whilst reminding that next week (week 50) is a normal pick up week, whereas the week after that (week 51) it will be so that everyone will be picking up a bag either on Tuesday or Thursday, as we will have no bags made in the last week of the year). Welcome that week to stay on a bit during satojako for some Oma Maa Glöggi!

Week 52 (2018) and Week 1 (2019) gives then time for all of us to be able to take a break, reflect and not in the least also develop thoughts also on paper for different other activities ‘beyond’ food we want to develop as a coop.

As you will have noted, we have opened the orders for the winterbags!, which will be smaller and consist mostly of processed and dry products, and thus cost less (120 euros a month). As we wrote already in the previous newsletter, aim is to develop the processed products so new products are to be expected in addition to the familiar falafels, seitan and yoghurt. There will also be greenhouse greens in the bag and our collected berries are in the freezer to be shared, as well as to make ready products from. In addition we will be experimenting with the cultivation of mushrooms (oyster mushrooms).

So, another repeat:), a lot of development of our foodbags will be upcoming this winter and made possible by your ordering of the bag!

Welcome to join for talkoot during any weekday at the farm or any pick-up day at the cafe!

You can sign up to work at the farm or in the cafe on pick-up days as well as offer or find a ride to and from the farm via the talkoot form.

Read also again the complete overview of our talkoot workings.