With these February greetings, we are picking up the thread of our monthly newsletter writing again, and commence by saying that Oma maa started off the new year well!

The last week of last year, and the first week of this year brought a well deserved production break of two weeks, after 50 weeks of production in 2019. Our first foodbags were handed out again in the second week of January, and in the following three weeks. As January had five weeks, there was no need to compensate for the first week lack of foodbags.

Setting many wheels in motion again

In January we cleaned up, organized and repaired a lot in our Rannankoukku kitchen. Our dryer was fixed by member Joonas, and got new fans spinning around their axes, making it possible for us to dry for instance our fava beans again, and then following make fava bean groats (härkäpapurouhe) as has already been figuring in the first foodbags of this year. The new central screw for our pasta machine finally arrived from Italy and the first whole grain spelt pasta has found its way into our food bags. The meat mill got its necessary spare parts, which means we can now much easier grind different produce (and we used it already for the making of our potato-fava bean patties). The cooler, which we use for example to cool our yogurt, got a new fan and is also again supporting our kitchen production.

This means that nowadays in the kitchen you can find, behind the specific production for a certain bagday, at the same time ongoing also the putting to soak, steaming, drying/grinding of different beans and pasta so that we can come to have a stock of different items for our food bags. A strong eye is of course also kept on energy use, making a maximum use of any heat generated. All in all it requires us getting a grip on a number of additional routines, and a new document has been added to the ‘Oma maa docs’ folder: Rannankoukku calendar. 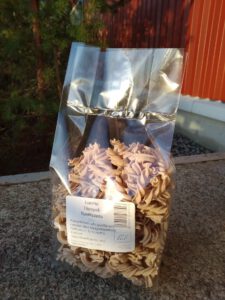 And we are getting an increasing amount of shared docs in drive organising our work on the farm, accompanying our increased capacity to be planning on different fronts. One of the things this is concretely expressed in is the shift in February towards biweekly food bag content and recipe emails.

In the emails we are reminding that every month the food bags will contain about: 1 kg groats (ryynit), 1,5 kg flakes (hiutale), 1kg flour (jauho), 1kg pasta, 500 g bulgur, and 1 kg fava beans groats (härkäpapurouhe). Also whole beans and peas will find their way from time to time to the bags. Of course there can and will occur variations in this pattern! Due to for instance issues with the mill, or if a machine runs into problems (may the latter however not happen for long!:)). But, this is the intention.

We hope the information regarding the foodbags coming out earlier, as well as the additional pedagogical element in the bag will be perceived as useful – all feedback is most welcome.

But organising and planning happened certainly also outside of our kitchen, and one other excel sheet worked on was that regarding our seeds, an updating of the existing database in Latin and Finnish. Slowly but surely we will move more into the greenhouse, and setting up the places for our seedlings. First to be sowed will be longer growing time requiring plants as tomatoes and chili’s.

Also, farmers will be having access to a program usable from one’s phone, in which all planting on Oma maa lands will be charted. In this matter we will all be able to keep track of what’s happening where, what is needed where and when, etc.

On the 18th of January we had our first Coop Day of the year! With some 20 coop members including farmers, board members and food members we talked about the economy of our coop, our democracy, as well as our farming and food bags – including Oma maa’s contribution to CO2 sequestration as well as biodiversity upkeep. 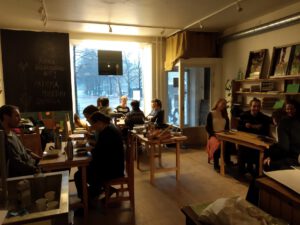 Our report of the day is still forthcoming, but one thing we can put out already and which is related to the development of our co-learning & democracy, is the idea that this year we will aim at four Coopdays. Following this first one, which we could see for the future as a first Coopday of the year with varying development points, the second one would be the annual meeting possibly in May. A third Coopday would then follow possibly in August, organised by the board, looking for instance at Oma Maa project applications. The fourth Coopday would be then around November, and would concern among other the evaluation of the farmers and food members as to how the season went, as well as the first reflections regarding plans for the first year, concerning farming and food bags.

On the 19th of January, some of us were back in Kaarlenkatu, then for the continuation of the founding meeting of Kumppanuusmaatalous ry. Established in May 2019, the association is taking its next steps to come to its rules, plan of action for this year, and the budget. Synergy in this is already happening with the project “Kumppanuusmaataloudella kestävyyttä, kilpailukykyä ja maatalouden arvostusta” (KUMAKKA-hanke) of the Helsinki Ruralia institute, and a next meeting, which will both be taken further the association as well as the Ruralia institute project, is on 22.2, and will include a talkoot by the participants on Lassila farm.

Oma maa was also invited to present last Thursday at the Night of Ideas of the French Institute, in a session entitled Live to Eat / Eat to Live. The conversants came from a diverse background, among other from the Ministry of agriculture, LUKE (Finnish centre for natural resources), and INREA, France’s new National Research Institute for Agriculture, Food and Environment, and as such the discussion was a good moment exchange as well as an opportunity to contribute with Oma maa’s envisioning on among other how change is to happen. 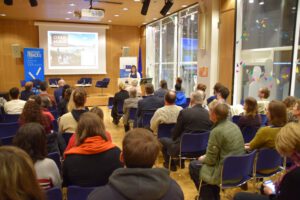 Besides these events, January also brought already a good amount of contact taking to Oma maa to come learn and work together, which is wonderful! Oma maa has several producer members working on a daily basis, several active food members carrying to varying extent different Oma maa tasks forward, and in addition to this Oma maa welcomes others to join for the co-learning and production. The latter is happening absolutely in order to strengthen Oma maa and the diversity of work we want to carry out, but also as the fulfilling of the mandate it has given itself: seeking societal change through the engagement of people with their food system.

And on that note – welcome to everyone to visit at the farm! Or then during our next Farmdining dinner on 7.2! Jan and Henni will be in the kitchen, we will be telling and updating on Oma maa, whilst Tuuli will be telling more about EU agricultural policy and subsidies. Welcome! Also to bring interested friends along. Our food bag order for February is at 62, more fit (and needed):)