From the 19th to 30th of April food cooperative Oma maa’s Agricultural Camp took place on Lassila farm, some 30km out of Helsinki, Finland. Four participants from Brasil, France, Germany, Poland, and a number of Oma maa coopers came out during the two weeks of the camp, during which we conversed, produced, built, dined, and sauna-ed. 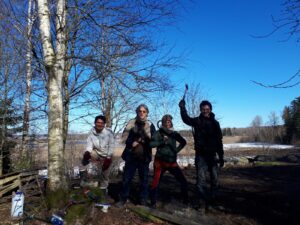 An Agricultural camp beyond food

The Camp wanted to offer an opportunity for international exchange around Agriculture, in which agriculture addresses our food system, but also the fulfilling of other basic needs. The reasons to do so stand firmly aligned with the overall envisioning and objectives of Oma maa food cooperative.

Oma Maa is a food co-operative based on community-supported agriculture (CSA) and ecologically and socially sustainable food production methods. Oma Maa supports an all year around ecological community process around good agriculture. Here agriculture refers to the cultivating and developing of the land to fulfil people’s need for food as well as other basic needs, and to make good, ecological life possible.

The working around basic needs is for Oma maa core to societal change, but only if and when this working is governed, developed and implemented by way of a peoples process. Many of us will logically follow the thought that, our basic needs as food and energy are such daily, pervasive societal issues; changing them changes many things. Changing their systems, meaning by changing the production, distribution and consumption of our basic needs we can in fact develop pathways towards more socially, ecologically healthier communities and society locally and globally. But of significant implication for our conclusions, political demands and action taking, starts from an acknowledgment that these processes of change are to be rooted in community/peoples’ processes around their daily needs. That these processes of change need to be co-produced, co-governed and co-managed according to collectively held values and not decided by profit-seeking markets, for they will not deliver the desired change. In other words, change happens when our basic needs increasingly become a commons.

This is at the core of the pedagogical process around Agriculture Oma maa wants to walk as cooperative, and which was also the base for the holding of the Agricultural Camp. The Camp wanted to concretely exchange on Agricultural, as also on Community supported Agriculture practices. 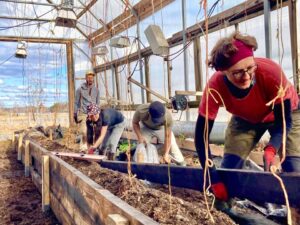 At the onset of the Camp, participants determined what activities were wanted to be undertaken. It was decided that the making of something new, in particular a permanent Kota /homestead structure, would be one activity focus, with the participating in the ongoing activities of the coop a second focus.

In order to come to the permanent structure, campers together went around on the farm discussing what would be a good place for the Kota to be built. Different locations were charted during the day, and in the evening each of them was discussed, bringing up considerations as regards to soil, wind flows, functionality and history. In the end a spot was chosen which involved the tearing down of an unrepearable 30 year old chicken hen, leaving the new structure on fertile grounds. After the tearing down of the hen, the preparing of the grounds for the structure involved many a heavy dragging and lifting of rocks and stones, with tractor and humanpower. Some of the wood was gotten from a local natural commons area – where local associated residents have made agreements regarding the use of swamp soil and wood. During the Camp the base of the structure was able to be erected, which is albeit the most important and heaviest part of the structure to get done. The birch tree bark side walls of the structure will have to wait till next year. they could have been obtained from trees which were in need of trimming at the time of the Camp. 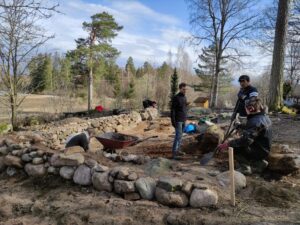 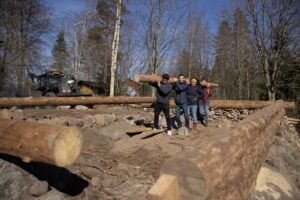 As to the necessary seasonal works on the farm – campers and coopers coming out also engaged in the tearing down and a newly building of permanent benches in the greenhouse, which besides being more solid structure were also made wide enough to let a persons lifting machine through. 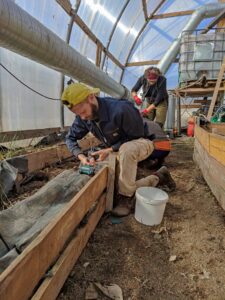 In both processes discussions took place on how to tackle each phase of the process as well as on the resources available to use. Experiences back home were told of as to what kind of structures were built there and how. So for instance the notion of the charring of the outside of wooden planks to prevent rotting was a suggestion taken home to see if it would help against insect decay in Brasil’s forest region. In the span of the days deliberations also took place as to how to deal with monotonous repetitive tasks as the charring of the wood and on how to deal with the fact that it is more effective to have someone who mastered a certain task well repeat that (endlessly), but is it pleasurable and how to then fruitfully go about it..

Most campers joined in on foodbag day production. The camp taking place in April meant that the production of foodbags took place entirely in the kitchen (no fresh harvesting yet) and packing room (of dry products as the coop’s flour, grains and groats). The foodbag days gave rise to extensive discussions on the produce used and the products made – as on the coop’s oat joghurt, the use of favabeans in different forms, as well as on the production of the year around foodbags at large. The appreciative and supportive feedback of the campers was very strengthening for the makers at Oma maa! 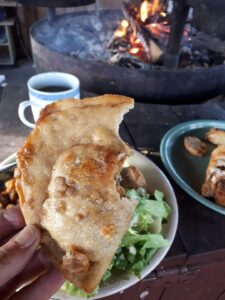 Our farmdining evenings, three course dinners made from the coop’s produce, always are something of a crowning on the ongoing cooperative activities and such was also the case during the Camp’s time, with a full long table in our membership space seating campers, members and Oma maa friends.

As customary, we took the opportunity to during the dinner tackle a theme important to the coop : namely on how our community is next wanting to tackle this year’s and next years budget –  starting point being the full design Oma maa is working to realise, and to achieve full understanding of this totality, and to then discuss how to reach this budget. We are wanting to take Inspiration from bidding rounds as German CSAs practice – in which members anonymously pledge what want to pay for the foodbags, with a second round with raised bids following if the budget hasn’t been reached. Our camper from Germany told more on how this works very well in a number of CSAs she knows of!

Trust in all of this, the possibility to be open in the fairings of the coop, is such a fundamental thing, also something to be continuously tried to be strengthened. Our camper from Poland told more on how she works with this in her CSA in Poland. 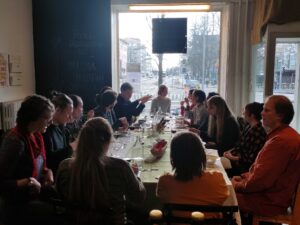 And then the menu itself – which campers and members collected the wild herbs for, which gave rise to a great time of exchange and learning in the kitchen, and which brought together local produce and methodologies and the global . 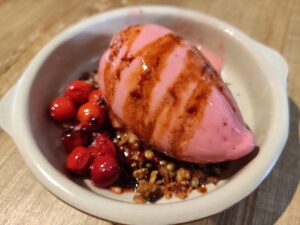 The Camp also visited another CSA initiative, in this case Rekola biodynamic gardens at some 120 km away. The different practices in the seedlings house and on the land, including the biodynamic principles, gave ample rise to exchange of thoughts.

Oma maa’s Agricultural Camp was a celebration of exchange and mutual support and a first discussion took place on the want to have a next Agricultural Camp next year.  The Camp in particular was also empowering for its participants, and encouraged to reach out of one’s comfort zone and explore what one is capable of. As one of the campers noted ”I thought I could not handle any of the bigger wood work, but in fact, having had always someone around who could do that, I had never even tried.”