On our Sowing and Milling facilities

On our sowing, not only on the ‘what’ but also on the ‘how’

We have been up and about in full swing. In the main greenhouse, the seeds of different kinds of tomatoes, beans, peas, chilies, herbs, squash, salads, asian leaves have already been sown. Some further deliveries of seeds and seedlings are still to arrive. So for instance also strawberry (and raspberry! new!) seedlings, as we will be renewing these plants this year on our coop’s second farm, Kaukon tila. Also the fruit trees are of course being cared for.

Also investments in the future seed sovereignty of our grains have been made. We have ordered some new grain varieties (like organic millet and chickpea) in quantities that can yield enough for all members after their resowing throughout a couple of seasons. More about this soon!

Every spring the issue is not only what we sow, but also how we sow. What’s new this year is that we have been experimenting with first of all a handheld soil blocker. The resulting soil blocks have felt to be a satisfactory alternative to the previously used carton cups, a main reason being that there is simply no need anymore for the latter. Also, the larger soil mass of the blocks seem to make for a good composition for the plants to start off growing in. Therefore now also a soil blocking machine has been ordered, and is expected to arrive in Finland from Holland next week!

Already last year we planted using an on foil transplanting machine. The equipment we bought then, allowed for one person to sit behind the tractor and tip down the seedlings. As the experience with the machine was deemed positive, now a second seat part has been ordered, so that two rows will be able to be done at the same time and straight next to each other.

Besides these machines, our farming system is also still in need of another investment – to get an irrigation system in place. This year we will be putting up a temporary system. 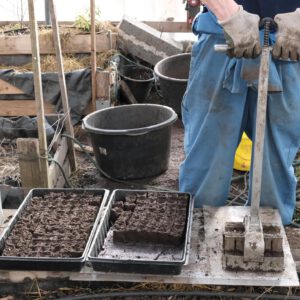 On our foodbags & milling facilities for Oma maa

In February and throughout March we realised two sets of food bags in which the first weeks saw a ready-made product, for which then the ingredients were given to make it yourself in the next two weeks. We started off our pedagogical systemic change food bags first with blinis, and the second month the learning concerned the making of breads. The giving out of a sourdough starter proved to be really appreciated (also in our recent bags), with pictures of great homemade breads baked being sent in!

We also kept well in sync with our objective to give out every month 1 kg groats (ryynit), 1,5 kg flakes (hiutale), 1kg flour (jauho), 1kg pasta, 500 g bulgur, and 1 kg fava beans groats (härkäpapurouhe), with also whole beans and peas finding their way into the bags. Bag content recipy mails sent out bi-weekly made it well possible to plan ahead also in relation to other shoppings.

We have now had to adapt a bit of this sequencing, due to the closing of our mill. As we informed earlier in an email, with our own equipment on the farm, we can grind whole grain flour and groats from rye and wheat for the food bags. But we will not be able to give out refined flour, flakes, whole hulled grains, or any of the ready-made products made of those. We will be able to bake bread from whole grain flour, and make those ready-made products which can be made from the grain products that we can produce with our own equipment. As such we have also made the switch back to weekly recipe and bag content mails.

This then is another area for us to develop: milling facilities for Oma maa! 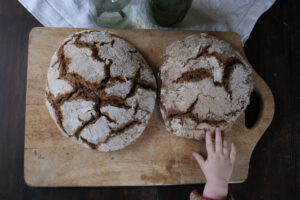