During the last days heavily filled with snow giving beautiful but time consuming challenges to the making and delivering of foodbags between the farm, its kitchen and the city, and to the keeping of greenhouse and tunnels standing up and at a decent temperature… I found myself accompanied by the wonderful Oxford Real Farming conference. The hundreds of sessions held online, attended to by more than 5000 people registered, and which one is able to replay whenever one wants to listen to them, was truly rewarding. With my Oma maa food cooperative’s agricultural deepdive now going on into its fourth year, and having never attended a meeting focusing on agriculture only, the conference gave me plenty of strengthening new, but also strengthening listening to Urgenci comrades sessions, and to other previously known voices of comrades from the global justice movement.

So I was drawn during the conference to a book launch session by one of the founders of the conference Colin Tudge, of his new book entitled ‘the Great rethink, a 21st Century Renaissance’.  During the session, Tudge in a very simple manner laid out thoughts around change which in its fundaments resonates a lot with also Oma maa’s thinking. And I agree with the author, that what we now absolutely also need, is an empowering simple. 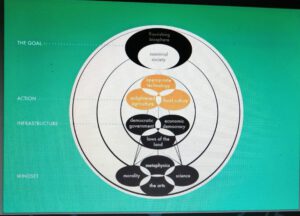 (photo of Colin Tudge presentation slide ‘the elements of the Renaissance’)

The starting point for the roadmap is the specifying of the goal :  What are we as Humanity trying to achieve? The answer for Tudge to that question is that we should be trying to create convivial societies in a flourishing biosphere. A convivial society refers to a society in which everyone is having the same chance to do what one feels good about. The biosphere means ‘the living world’, the natural world, and is intended here to be a correction to the frequently used word environment, which means ‘surroundings’, and which is an anthropocentric idea that people are the most important creatures, with all the rest around being “environment”. The concept of biosphere puts to the forefront we are an integral part of the natural world.

What then do we need to do to create such convivial societies in a flourishing biosphere? Tudge explains the answer to this question to be lying in technologies, meaning all that we do to manipulate the physical word –  including crafts and high technology – that further that goal. Technologies of today need a critical appraisal, as they often do not further that goal. Some technologies make our souls redundant. What we instead do need, are technologies that enhance our lives to strive towards our overarching goal.

For Tudge then, the two technologies that really stand out, and that we really need to get right, are agriculture and food culture. Tudge uses the term enlightened agriculture, in short real farming (hence the name of the Oxford real farming conference.). Enlightened agriculture is compounded by the ideas of agroecology and food sovereignty. In short, the concept of agroecology says we should be treating all farms as ecosystems, and thus design a farm according to the ecological principles of an ecosystem.  That will mean first and foremost, the focusing on plant based agriculture, meaning arable and horticulture, and for this thus to be providing the majority of our needed calories and protein, as well as most of our vitamins and minerals, etc. Secondly, this agriculture would importantly also include some animals. The result of such farming would be plenty of plants, not much meat, and maximum diversity.

The resulting diet corresponds with what is seen as a good diet in today’s nutritional theory. This corresponds also with the features of our great food cultures. It is faulty to think that proper farming would result in not eating well. On the contrary. Oma maa’s year around foodbags and  farmdining are also an expression of such an agriculture – be it that our foodbags are vegan. But the farm has three cows which are grazing for biodiversity upkeep, as well as chickens of which some members order eggs.

Tudge’s roadmap then continues to infrastructure. To have technology serving us well, we need infrastructure that will encourage such things. This will come from governance, economic structure, and just laws. Governance should be democratic, leading to justice and to the using of everybodies input. This applies to farming as well, as we know. Much better agriculture is achieved by listening to the indegenous in situ peasant voices, then imposing structures from above. This is what democracy in action should look like. This is about the getting of everybody on board to restructure society. And I add here, that this is another way of wording that change in society is to be rooted in peoples process around basic needs, as Oma maa’s thinking has at its core.

Tudge continues then to explore thoughts around economy, again, something to be developed to achieve our stated aim. Tudge calls for the development of ‘green economic democracy’, which looks after people and the biosphere, and he lies down down 6 principles of such an economy :

– All entreprises in this economy should be social entreprises. They should contribute in net to the wellbeing of societies and the biosphere.

-This economy should be a tripartite mixed economy, with state, private and community ownership. For instance, CSA’s like Oma maa are a good example of communities taking control of what is done. And I add, as Silke Helfrich once put it, up with the commons! beyond but not necessarily without state and market!)

-All investments made in this economy should be ‘positive investments’. We can use the capitalist instrument of investing ones money in order to gain some profit, However, we should only invest in activities of social entreprises contributing to the wellbeing of society and the biosphere.

– This economy has a universal basic income, in order to ensure everyone can live and work with dignity.

– This economy rests on a change of mindset, in which we move away from the idea of having and owning as much as possible to the opposite idea : how little do we need to live a good life. For us in the Western world that probably mean about a third of what we have.

– This economy is a circular economy.

I stop this blog writing and leave the work of Tudge at this, and return whilst continuing on the themes above to the co-drafting of Oma maa’s new vision and action plan. Strengthened once again. Thank you Oxford real farming conference!