Oma Maa is a process 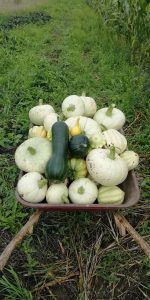 The following text was written to support the reader in getting a comprehensive overview of the process Oma Maa is, its aims and objectives. The text as such deals with what to expect and what you can be a part of when joining the coop’s activities by ordering a foodbag or otherwise.

At the moment (August 2021 ), not yet all of the described activities in this writing can again be carried out, or at least not in a similar manner as two years ago was the case. in any case, and especially also today, we continue to work towards the important goal of the strengthening of an alternative food system, which is safe and accessible for all of us also today. It is wonderful you are with us in it!

Osuuskunta Tuusula Oma Maa (‘Own Land’ cooperative, in Tuusula (30km from Helsinki), Finland) is a food cooperative founded in 2009, practising ecologically and socially sustainable food production. Since 2014 the cooperative is working according to community-supported agriculture principles, which means that the coops producer and food members form a network of mutual support, in which the risks and abundance of the farming season are shared. The coop has several active producing volunteers working daily on the farm (there are no salaries currently for everyone, but other forms of compensation exist) and some 160 food members, some of whom having central roles in the coop for instance carrying out administrative and distribution tasks. In addition there are also ‘try-out members‘ who after a 3 month period decide whether or not to join the coop.

Foodsouvereignty is a core value of the cooperative. This goes hand in hand with the notion that food is core to (systemic) change, and that by engaging with our foodsystems (production, distribution, consumption) we can develop pathways towards a more ecological and socially sustainable society. Oma Maa food cooperative wants to explore this potential in its (ecological and social) totality.

On the farm, the cooperative cultivates grains, oil and legumes, and garden plants in the open air and in the greenhouse (which has been running through its first year). This summer we have been harvesting produce like potatoes, pumpkins, tomatoes, cucumber, salad greens, radishes, roots, onions, beans and corn.

In the cooperative’s forest garden, there are fruit, berries and other perennial garden plants grown according to permaculture principles, and this summer we enjoyed bountiful amount of pears, plums and even apricots! Also vineyard terraces were commenced this summer on the farm! Needless to say the sweet fruits of all this labour are not for today nor tomorrow, but to be reaped in the years that come.

Also a nearby second farm, Kaukon tila, is a part of Oma Maa cooperative, where this year our strawberries and black currant berries, peas, beans, fava beans, salad and swedes grew whilst we have planted also a part of our potatoes there. Also further cooperation takes part with local surrounding farmers regarding our grains, which in terms avoids them having to sell out to large intermediaries.

Oma Maa wants to challenge how global markets have come to determine what can be grown in Finland. There used to be pineapple grown in Finland some 100 years ago. Whilst it’s not about the pineapple, realising this gives a whole new ring to the sound of what future food actually could really be about. On a more longer term, Oma Maa is wanting to integrate local and traditional methodology (because of its efficient resource use) with global practices and tastes (grown for instance in our edible food forest), and with it address the issue of what can and should be the food of the future.

Oma Maa cooperative produces weekly comprehensive foodbags for its ordering (try-out) members which include produce from the land and the greenhouse, as well as ready made products. The ready made products are made from the farm’s produce, and include currently typically items as wheat and rye bread, falafel, seitan, and oat yoghurt.

In addition other items will be made for the bag pending on seasonality. For instance, we have been adding wild herbs and nettle pesto with our hemp seeds to the baggs. Additional items also depend on what produce has been able to be conserved over winter, which is linked to the harvest.  This can also lead to for instance a tea or a muesli being added to the foodbag. Besides fermenting or pickling, different items are also experimented with, like soy sauce from broad beans, malt, and plant based cheese. The secondary production takes place in a rented building ‘Rannankoukku’ which is a stone drop away from the farm.

Oma Maa offers the same foodbag for all and there are solid reasons for this. The bag is wanting to promote comprehensive food system change and is thus not to be seen as ‘pick and choose shopping’. The foodbagg also wants to holistically address health related issues resulting from our no longer eating of local produce. In addition the bag wants to comprehensively address the carbon footprint as also handprint of food production. Oma Maa’s foodbag is about a change of food culture, challenging the illusion of freedom when buying from a grocery store. Last but not least, our foodbag is also about the democratising of our food production and with this also importantly a democratisation of our work. The latter then relates to for instance how many days in the week anyone of us will be working in our Rannankoukku kitchen, in order for other people not to work in their own kitchens.

Currently the coop has some 70 (whole) bag orders (meaning the total sum of every week (whole) and every other week (half) orders counted together), which is about sufficient to pay for basic costs of the coops infrastructure, but not for instance for salaries for all the farmers, nor for investments.

The meetings – our democracy

Oma Maa coop has a board with producer members and food members and different working groups like on communications, administration and financial issues, foodbag handout, and talkoot (communal works). The farm has its own daily morning and weekly friday meetings. The board meets about once a month in meetings all members can attend, whilst the different working groups are organised in different ways, using different tools like whatsapp groups etc. An important annual meeting is the presentation and discussion regarding the years farming plan, and every year there is of course also the coops annual meeting. No ecology without democracy – whereas also in Oma Maa coop, the exercising of democracy is a constant process in need of evaluation and development, and importantly will need to entail space and willingness for learning.

Oma Maa has a constant call open for members to join in the co-production of all that is done. Besides organised talkoots, people can drive along to the farm on any given day to work along with the farmers and give input. The cooperative is also open to members wanting to learn and co-produce on a more permanent basis. So there have been food members staying for a certain period on the farm and bringing in also their skills with regards to for instance food bag content.

Oma Maa foodbag are currently handed out in Tuusula, Järvenpää and (for the majority) in Helsinki. Members coordinate and are actively involved in the handing out of the foodbags. The coop discusses much on how this important (bi-)weekly contact with foodmembers can be developed.

Oma Maa has begun to hold three-course farm dining dinners (all ingredients from the farm, and produced by the cooperatives cooks and farmers) in its member and restaurant space in Helsinki on Kaarlenkatu 15. The dinners are typically accompanied by joint discussions around issues of the cooperative or broader societal issues and are open to members and friends. They have been nice and informative moments to get up to date but also introduce Oma Maa to new friends.

In the future Oma Maa wants to open its Farmdining to the general public, and hold brunches as also three course dinners on Saturdays on Kaarlenkatu. Also in the future a wish is to hold Farmdining dinners on the farm. This will require developing the cooking facilities on the farm. A future project is for example the building of an artesanal oven.

As described in the above, our farms are places of food production, but also places defending biodiversity and places for us to develop our carbon handprint. In addition our farms can be seen as places of learning, with regards to food but also as Oma Maa has been envisioning ecological building and energy provisioning. So we can be imagining our farm to be hosting co-learning processes, starting from the core questions as to What is it we want to do? What are our resources to do so? and What are our skills to realise this? – and to then learn how to do the maths with regards to the material costs, financial costs and carbon footprint of anything we make. Goal is here to empower by doing and co-learning. Whilst for such a process to take a more institutional form is of course a longer term process, in different ways Oma Maa coopers on the farm are already engaged in such collective experimental co-learning processes.

The working and learning of Oma Maa does not happen in isolation, but has been happening in cooperation with local farmers and partners as Eetti, Ehta Raha and other Finnish CSA’s, five of which together in 2019 founded Kumpanuusmaatalous ry, and importantly also as part of a global movement. Over the years a good number of comrades have been visiting us or doing things at Oma Maa’s premise in the city as part of different movement process, as around solidarity economy building and the commons (as the RIPESS network, Cooperation Jackson) whilst we also participate in Urgenci’s community supported agriculture european and global network.

Oma Maa is a process, in a full fledged developmental phase.

When ordering an Oma Maa foodbag, one is ordering importantly a local organic vegan foodbag, which is bound up with its production – with the coop’s capacity to make for a good harvest in summer and to then conserve produce for winter, as well as with the available time and resources to experiment and develop secondary production. Important is also to look at the bag not from a singular bag perspective, but to look all season long and see along the line the moments of abundance and of the periods when less so.

But beyond the foodbags, Oma Maa is a process of people taking (a part of) their food system into their hands and to try to realise the potential for transformation that can give in different areas. Efforts in this process should be viewed from a short term but importantly also long term perspective, as also from the perspective that a sufficient level of engagement is core to realising this potential. A challenge entirely worth pushing for.

On behalf of farmers and board,